Today we were due to fly back to New Zealand - probably!

You can never tell for certain until the flight leaves, and even then there are sometimes boomerang flights going back to NZ, as well as coming down to the ice. But we kept our fingers crossed that we wouldn't get one.

Leaving Scott Base involves a whole new set of procedures. First is bag drop, which means packing everything up into your two Antarctica NZ bags, the large black one which gets checked in, and the smaller green one which you keep as carry-on luggage. If the flight boomerangs, or is delayed, you might have to go a day or so without your large bag, so you need to think carefully what to put in which one.

The night before departure, you bring both bags to be weighed (and you get weighed too) and the black bag is taken away. Then you keep an eye on the noticeboard to see what time you need to be ready the next morning.

Our meeting time was 6.30am - that meant 6.30am in the locker room, all packed and dressed in cold weather gear, and hopefully with nothing left behind, including lunch in a brown paper bag, put together the night before from sandwich fillings and other treats that Mike the chef left out for us.

Four of us were leaving this morning, and Ash drove us out to the airfield - not Pegasus Field,which we flew into, because that's now closed for the season, but Williams Field which is closer. The American bus was coming over the hill from McMurdo with their passengers for the flight, but Ash managed to sneak in front of it.

I didn't really take in Pegasus Field at all when we arrived, but Williams is pretty scenic. No passport control or any formalities -you just wait for the call over the radio that they have finished refuelling and are ready to take "Scott pax". Ash zoomed over as soon as we got the call, so we could beat Ivan again and get good seats on board! 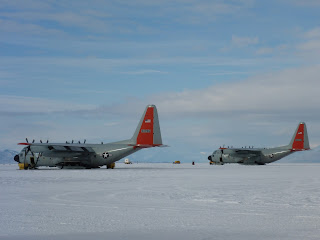 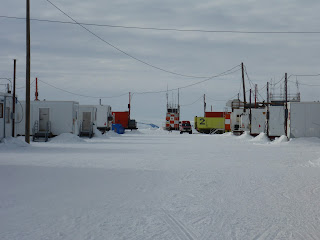 This was another seven-hour flight in a Hercules, but it all went very smoothly. I guess we knew what to expect! There were more people, but it wasn't as hot, and this time I even had some leg room. All the green bags got stacked in a pile down the middle of the plane, but this time I brought a smaller day pack as well, so didn't have stuff falling off my knee. The windows were harder to get at  - you had to climb over and stand on things (in fact I nearly stood on a person, not realising that the US Air Force guy two seats along had unrolled his sleeping bag on the floor and gone to sleep in it), but most people looked really tired and slept a lot of the way (although not on the floor)!

That's another thing about being down on the ice in summer. The constant light outside makes it easy to think that you'll stay up for a  bit longer, and a bit longer again, and people who have come down with work to do are focused on getting that work done, which is another reason why Scott Base has a big focus on set work hours and the importance of recreation and having time off. 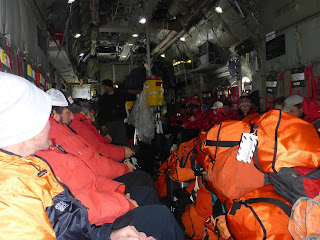 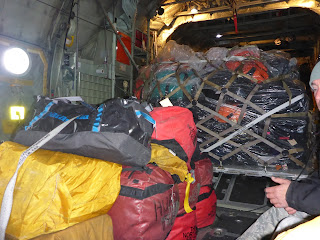 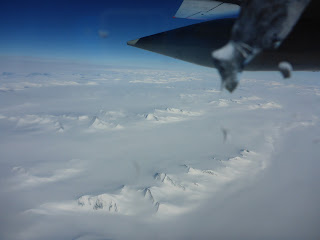 Woody was waiting to pick us up at Christchurch airport, and then it was back to the Antarctica NZ offices to de-kit and hand the gear back. her we were back in the same place we'd been a week ago, but what a lot has happened in that week!