Unexpected treats (but everything down here is a treat)


Today our programme got rejigged slightly and suddenly a trip to Captain Scott’s hut at Cape Evans was on offer. How could anyone refuse that?
There are three huts that are either very close, or fairly close to Scott Base. Discovery Hut (from Scott’s first expedition) is at Hut Point, right beside the American base at McMurdo. Cape Evans houses the hut from his second Terra Nova expedition, the one from which they launched their attempt on the South Pole, and further away at Cape Royds is Shackleton’s hut from his Nimrod expedition. (Discovery, Terra Nova and Nimrod are the names of their ships.) I could never get the positions of these three huts straight in my mind before, but now I’ve been to one – and might see another tomorrow – it all makes more sense.
Departure time was set for 8am, we got away by 8.15, packing the survival kits on the roof of the Hagglund in case it went through the ice, so they would float. (Comforting thought.)
Mark drove us out from Scott Base, and across the sea ice in front of McMurdo, then just kept going in a straight line across the ice for about an hour and a half – 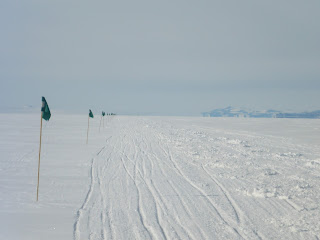 But we did stop to have a look at these amazing icebergs frozen into the ice, near the islands we saw from the top of Castle Rock. The icicles were melting and we could hear the tinkling of water, the only sound in that vast landscape apart from the odd screeching skua overhead. 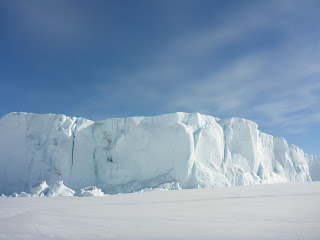 The hut at Cape Evans is right on the water’s edge, or where the water would be if the sea ice melted, which means you have to watch out for tide cracks and make sure you don’t fall into one. 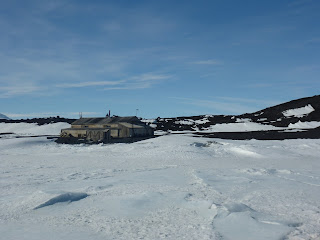 I’ve read so much about these huts and expeditions – books and diaries written by the men themselves – that I knew it would be an amazing experience to go there, but everyone finds it amazing, no matter how much you know (or don’t know) about the early polar explorers. For a start, it’s astonishing to think that they brought everything they needed with them to build the huts, and then built them, and what they left behind is just a fraction of what they needed for their time on the ice.
And inside, it’s so beautifully restored that history seeps out of every dark corner, and you can close your eyes and imagine it all being used: the kitchen, bunks, tables, jugs and bowls, chairs, scientific equipment, clothes, sealskin shoes, tins of food, piles of skis leaning against the wall…
I especially love the tins and cans of food and other kitchen equipment - 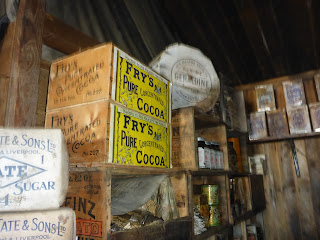 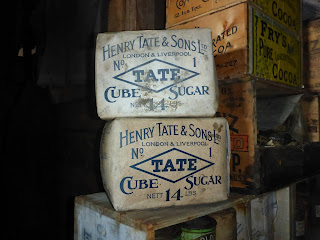 And the way that all the bunks differ because the men built their own ones, some better than others. 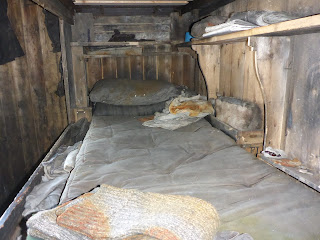 And other random stuff...


After we’d dragged ourselves away, we drove a little way further to see the Barnes glacier spilling off the slopes of Mt Erebus – 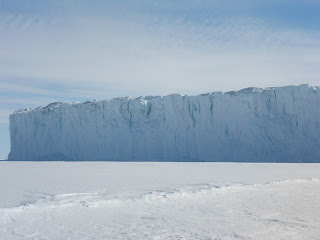 And on the way home, we saw one Adelie penguin - the first one we've seen (because they need to live near the edge of the sea ice) that caught sight of us too and scurried away. 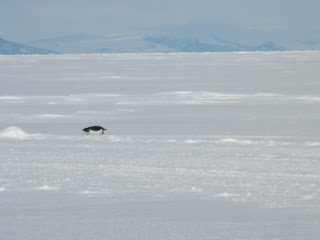