Today looked as if it was going to be a quiet day because it started to snow and the forecast was for worse weather to come, but it has been really busy and full of fascinating stuff, from smelly seal blubber to fossils.
This morning I had a trip to Discovery Hut organised with Paul, the science tech, as driver and guide. Discovery Hut is the hut from Scott’s first expedition, and it’s tucked away in a small bay only a few hundred metres from the American base at McMurdo.
We took the main road from Scott Base to McMurdo (only 5-10 mins drive away) and drove through a muted black-and white world, so different from yesterday’s blue sky and sunshine. 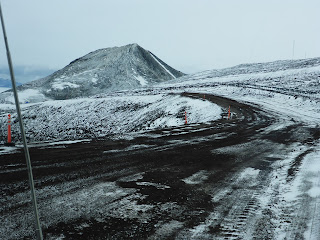 I’m glad to have been able to experience such contrasting weather conditions, especially for visiting the hut where Scott’s team lived through much worse weather. In fact the hut was prefabricated in Australia and based on an Australian bungalow with a wide verandah, and it proved so cold that the men ate and worked there but slept on board their ship anchored nearby. 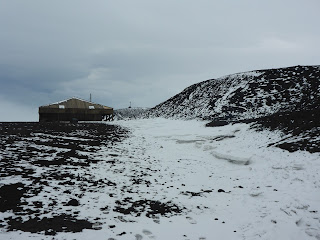 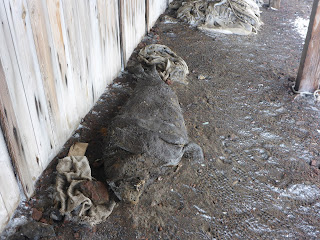 I was lucky enough to have ten minutes or more inside the hut on my own, just soaking up the atmosphere. These huts are so evocative of history that you almost expect to hear voices or catch glimpses of the men at work. 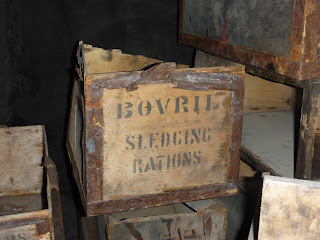 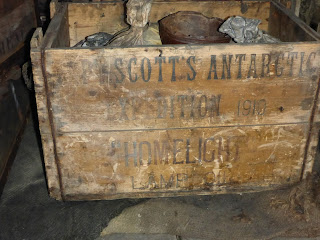 Afterwards we had a drive around McMurdo, which makes you see Scott Base in a whole new light. McMurdo is so much bigger, housing over a thousand people, and it has big accommodation blocks, a fire station, hospital, helicopter pads, warehouses, a gym, a chapel,a coffee house/wine bar and huge computer labs, and a more industrial, mining-town feel.  Having said that, the people we did meet in the labs and the canteen were all really friendly. Scott Base has an American night every Thursday and apparently the Americans from McMurdo love coming here for dinner.
Whenever you leave Scott Base, even if just for a walk, you have to sign out, say which vehicle you are taking (if driving) and what time you expect to be back. At least one member of your party has to take a radio and spare battery, and you have to call in to the comms team at regular intervals with updates. We signed out from 11 to 12.30pm, but were out longer than planned as there was so much to see, so we called back and asked comms to extend our return time to 2pm. We also asked if they could arrange to put aside two lunches for us and lovely Ruby (who was on our Cape Evans trip yesterday) sorted that for us too.
There was more to come – I haven’t even got to the fossils yet! The day wasn’t over!